There are no more onsite tickets for Tuesday’s debate but you can certainly run your DVR, your mobile phone, social media sites or anywhere else you get your news. Thank you to DMACC, WHO-TV and you, the voters.

Thank you to all the delegates and alternate delegates who stepped up to attend the Third District Republican Convention in Creston on April 23. The winds were blowing–and not just from the speakers. It was a day of rousing speeches, peppered with laughter and little, if any, drama. All our alternate delegates were seated to give great support to the overall convention.

District Convention Organization Chairman Wes Enos of Polk County, along with Mary Whisenand (Polk County) and many others, set up the Convention floor on Friday night, April 22. One of the many highlights of the Convention was the heroine of the morning, our own Amy Enos, who stepped up and belted out the “Star-Spangled Banner” with about five minutes’ warning. Add in the detailed preparation of District Convention Credentialing Chairman, Joe Heuertz (yes, of Polk County), we had a smooth check-in and the gavel came down promptly at 10 a.m. The day’s duties and activities were over by 3 p.m. The same team moves on to the Republican Party of Iowa State Convention on Saturday, June 11 in Des Moines. 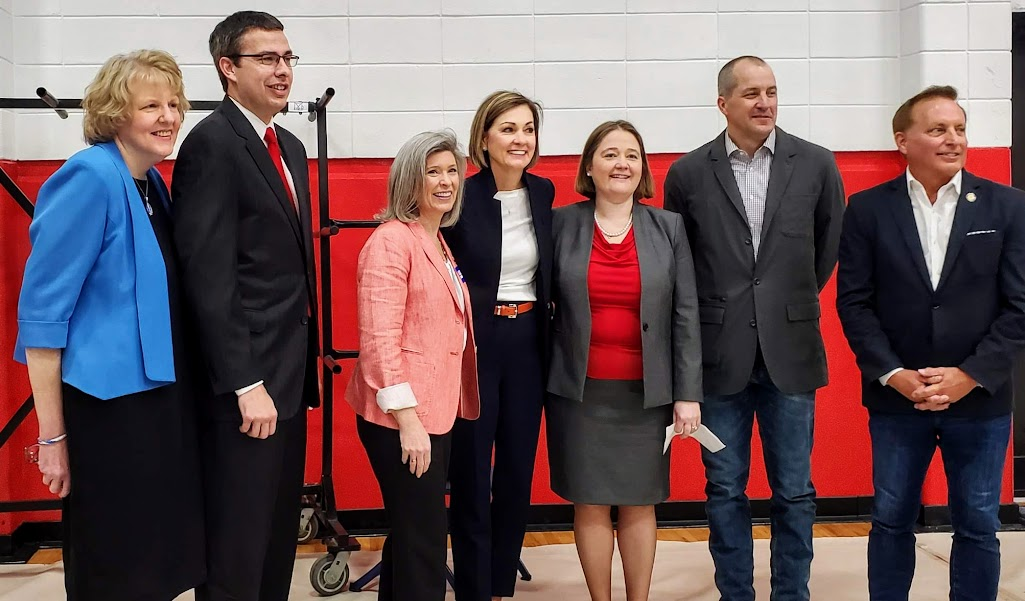 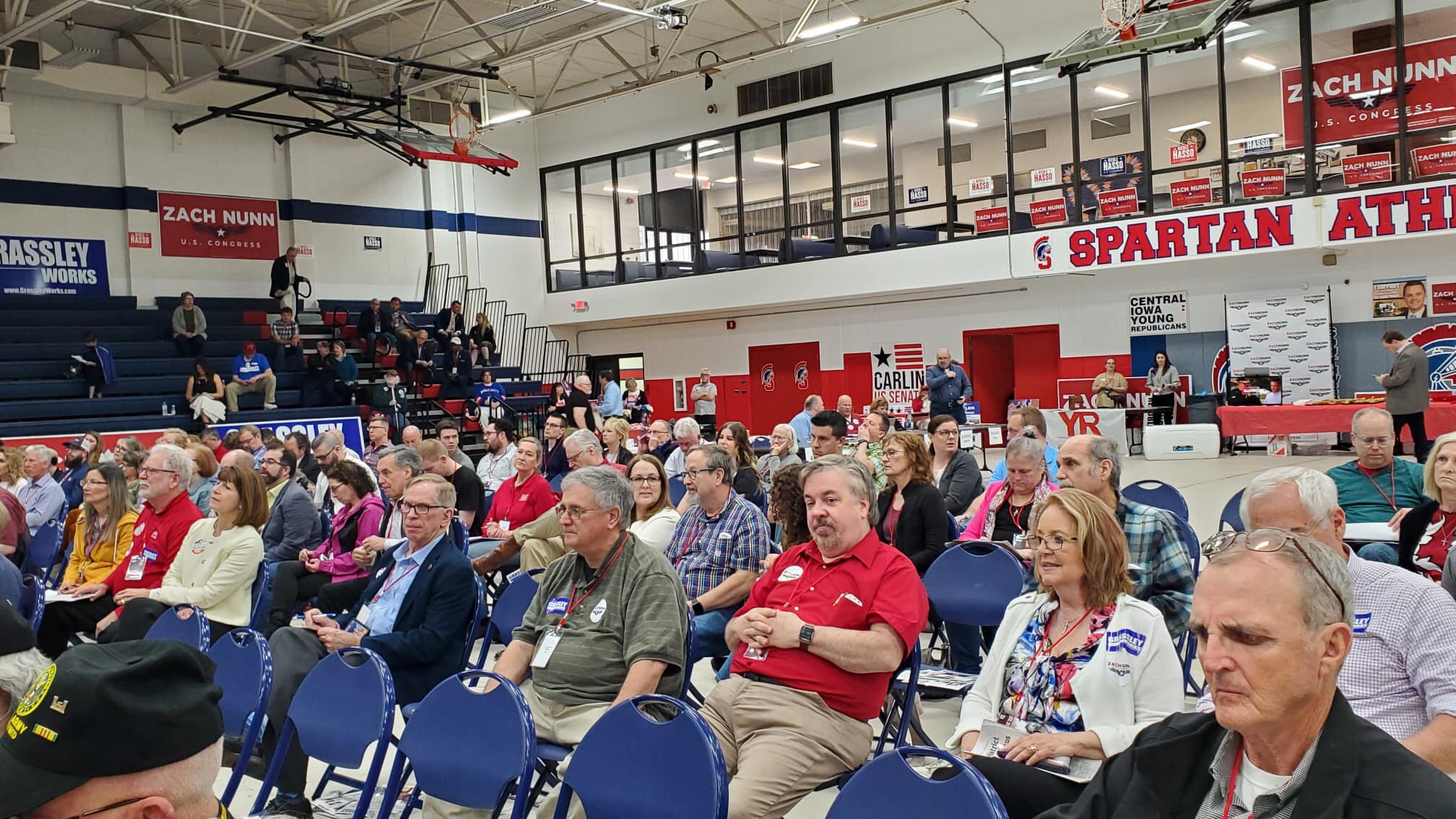 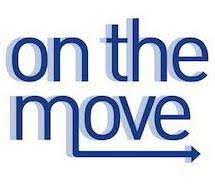 The Republican Party of Polk County has temporarily moved its office and monthly Central Committee meetings to Governor Reynolds Campaign and Iowa Victory Offices in West Des Moines, located at 1516 Valley West Drive. This office will be the focal office of the 2022 Iowa Victory program and winning campaigns. By hosting our meetings in the new location, local Republicans, friends and activists can work together to assist not only our local campaigns but help with all the statewide campaigns across Iowa. We will retain our Republican Party of Polk County headquarters at 6600 University Avenue, Windsor Heights, but will also utilize this large space for helping our team to victory! A true win-win for all!

LOVE MAKES THE WORLD GO 'ROUND.

EVERYTHING ELSE NEEDS MONEY

Let's have a frank talk about our love affair with success. We've certainly been having some good things happening at Polk County Republicans. You read about them. You hear about them. You participated in most of them. After all, it's not a one-sided relationship here. It takes us all--working together to keep things fresh.

We have had maximum participation at the Party level with the Central Committee meetings and Conventions overflowing to capacity. Our volunteers are stepping up to walk in the parades, make phone calls, attend events, door-knock and most selflessly, run for office.  With our new Build the Base program, we will meet more and more new folks in our neighborhoods, those who think and act like us. You see, there really are Plenty of Fish in the Sea.
But as with any long-term relationship and building a successful future together, it takes money.
You may not be as "rich as Rockefeller" or "King of the Road," but surely you have enough spare change laying around to help us keep our relationship "fresh" and working "in the style of which we have become accustomed."  We need your help. Will you consider a monthly donation? It automatically deducts from your checking account each month.
* $5 a month - Purchase tents/tables/signs to put our volunteers at events across the County to register more Republicans
* $10 a month- Fund the Build the Base incentive program to recruit 200 volunteers to target GOTV efforts in targeted precincts
* $25 a month- Funds a strong GOP leadership at the local, state and federal level and brings awareness to the community with our  events, activities and social efforts (think of it as our monthly "Date Night")
* $100 annually: Join our Century Club which promises that you will be called the "Champion of Polk GOP" or at least you can rest knowing you are doing something really, really, good for the Republican Party of Polk County.
Consider a one-time donation by clicking here: Donate Here  Yes, "there's a lot of love in this here house"--but in order to keep that bright future together, we really need your help!  Thank you for stepping up. And it goes without saying, "We Thank You".

The first Build the Base Meet and Greet will be held on Tuesday, May 3 at 6:30 p.m.  If you live in Clive, Windsor Heights or West Des Moines please join us at Jethro’s BBQ‘n Bacon Bacon located at 1480 22nd Street, West Des Moines.

Meet your neighbors as well as the candidates from House District 31 and 32 and Senate District 16.

The Republican Party of Polk County Volunteer Program, Build the Base is designed to award those willing to get involved in the election cycle.

We designed this program to increase Polk County volunteering.  You will be awarded for the time you spend to elect Republicans in federal, state and county elections.  Pick tasks and let’s all work together to get Republicans elected.  Appetizers and pop will be provided - this is a social and informational gathering.

Mark your Calendar for Saturday, May 7 and join Governor Reynolds at the opening of her Campaign office/  Meet the Governor and enjoy lunch as you learn ways to get involved.  Register Today 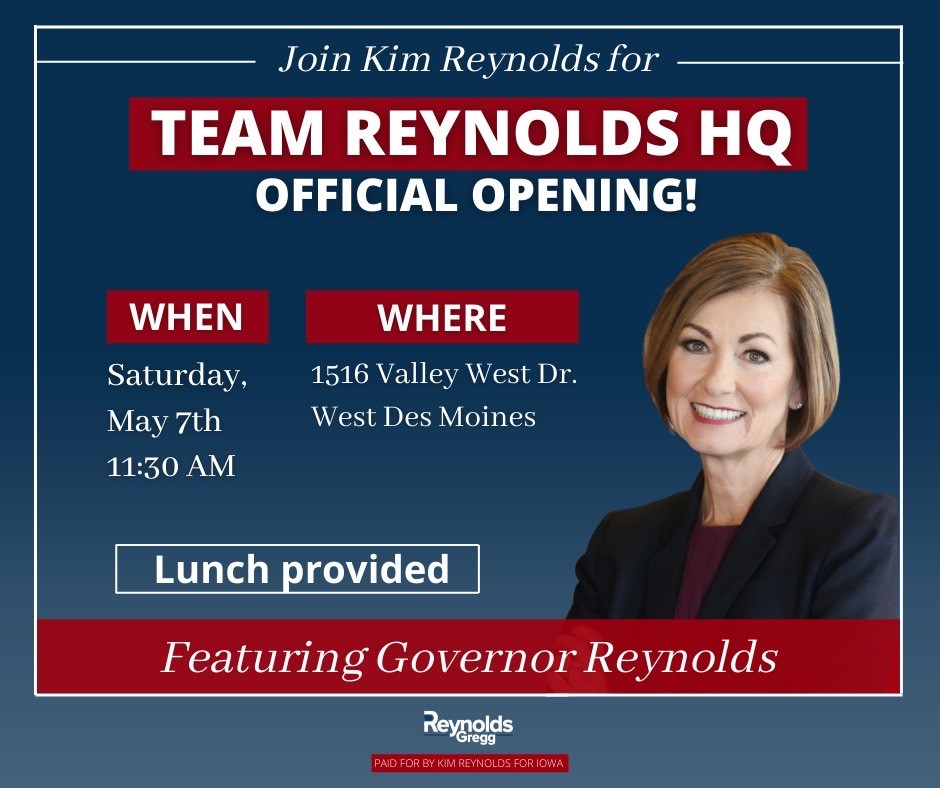 The annual CelebrAsian celebration at Gateway Park in Des Moines is coming right up. All things Asian, all weekend long. And our presence gives us the opportunity to visit with like-minded friends and make new ones, too. We need YOUR help to fill many shifts. Contact us at [email protected] to sign up. 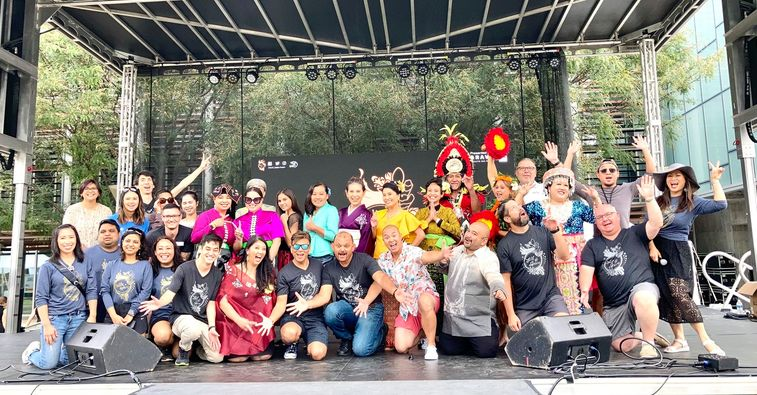 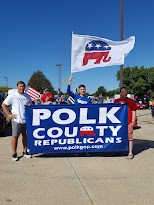 But only 64 Days Until The Fourth of July

Do you have YOUR parade gear on? Please get involved as little or as much as you can because it helps spread the word about our mission, our values and most of all, our commitment to turn Polk County RED. Thank you to Mary Whisenand for coordinating these again this year. We need walkers, riders, shouters and friends! A way you can help? Bring a bag of non-chocolate or non-meltable candy to the next Central Committee meeting on Tuesday, May 31. We can never, ever have too much candy for the children. (Yes, the children.)   Watch for details of the parades we will have candidates and an entry.

Here are the upcoming parades:

“First, we want to thank you for making the Republican Party of Iowa one of the top performing state parties in the country. Without you, our GOP leadership and delegates, your hard work, our party would not have seen the success we have had in the past few years.

This year we have a tremendous opportunity to turn Iowa into a beacon of hope for Americans across the country. While Democrat-led states continually trample on the rights of their citizens, Gov. Kim Reynolds has defended freedom against Biden’s overreach. Now, we have to help her and our Republican majorities by winning back statewide seats we have not held in decades. We must elect a Republican State Auditor, State Treasurer and State Attorney General, all while defending Governor Reynolds, Secretary of State Paul Pate, Secretary of Agriculture Mike Naig and our House and Senate majorities.

While the Democrats are working to destroy Iowa’s first-in-the-nation status, we can promise you that the Republican Party of Iowa is on a path of securing this long-standing tradition. Chairman Jeff Kaufmann was chosen to chair the Republican National Committee’s Presidential Nominating Process Committee, which suggested no changes to the early primary calendar. This was a huge first step in protecting our first-in-the-nation status. While the process is not over yet, and we are not taking anything for granted, all three of us are committed to working together as your RNC representatives to do everything in our power to protect the caucuses.

Lastly, it has been an honor to serve you. From local community events to our annual Lincoln Dinner, it has been an opportunity of a lifetime to fight alongside you to defend our freedoms. Thank you for your service to your party, our state, and the nation as we work to elect Republicans up and down the ballot in November.

Together, with God, we will make Iowa stronger!”

Elected by the Third District Delegates at the April 23 District Convention to a two-year term on the Republican Party of Iowa State Central Committee are:

We have been working hard with the Republican Party of Iowa and our local leaders to field candidates for the June 7 Primary and November 8 General Election. We thank them–and their families–for getting out our message!

Please go to the Iowa Secretary of State’s website to review all our candidates and information. Primary Ballot 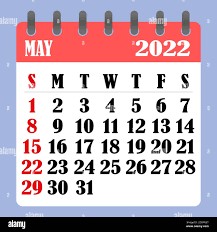 Consider attending any or all of these upcoming events: